Lost among the multitude of announcements and happenings for Gliph this past weekend was the introduction of our Responsible Disclosure Program.

As a platform focused on providing security and privacy, it is important that we involve everyone willing to help us keep the Gliph community safe. We created a page to officially describe our Responsible Disclosure Program for whitehats and announced the first contribution from a security researcher.

Anand Prakash, (@sehacure) a student at Vellore Institute of Technology in kanchipuram, Tamil Nadu, India has proved a helpful early contributing security researcher to Gliph. We would like to thank him for his work.

If you are a security researcher, we encourage you to check out the program and reach out to us if you have any questions or feedback. You can reach us at security at gli dot ph.

We have an iOS demo video up if you’re hungry to see how it works.  Also a step-by-step guide to setting it up for Android and for iOS. But this is more than just a new feature for us and we wanted to go into detail as to why we’re adding Bitcoin to the Gliph platform.

Over the past several months the Gliph team has been fascinated by Bitcoin. Bitcoin brings privacy to payments that is unavailable with traditional banking. The software behind Bitcoin is open source and has sustained great scrutiny. The currency itself is distributed, and transfers can take place with little or no fees at all. We love that no one company or government controls Bitcoin, and that even its creator(s) are shrouded in anonymity.

We believe Bitcoin and the ideas behind it have the power to change the world.

But when our team began using Bitcoin every day, we noticed some rough patches. Getting started can be confusing. If you were able to get a wallet set up, it was easy to get stuck asking “what next?” If you wanted to send Bitcoin to a friend, you had to awkwardly copy and paste long wallet addresses into tiny form fields. Existing solutions, even from biggest players, felt too technical and took the fun out of using this amazing new currency. END_OF_DOCUMENT_TOKEN_TO_BE_REPLACED

If you haven’t, you may also want to read about why we added Bitcoin or how to use Bitcoin with the updated Gliph Android app.

END_OF_DOCUMENT_TOKEN_TO_BE_REPLACED

Today we’ve released version 1.1 of the Gliph Android application to Google Play. Our Android users have been very patient in waiting for updates, and today marks solid progress. This entry covers both the updates and how to use the new Bitcoin functionality in the app. You may enjoy the demo video of how awesome Bitcoin can be on Gliph available here. 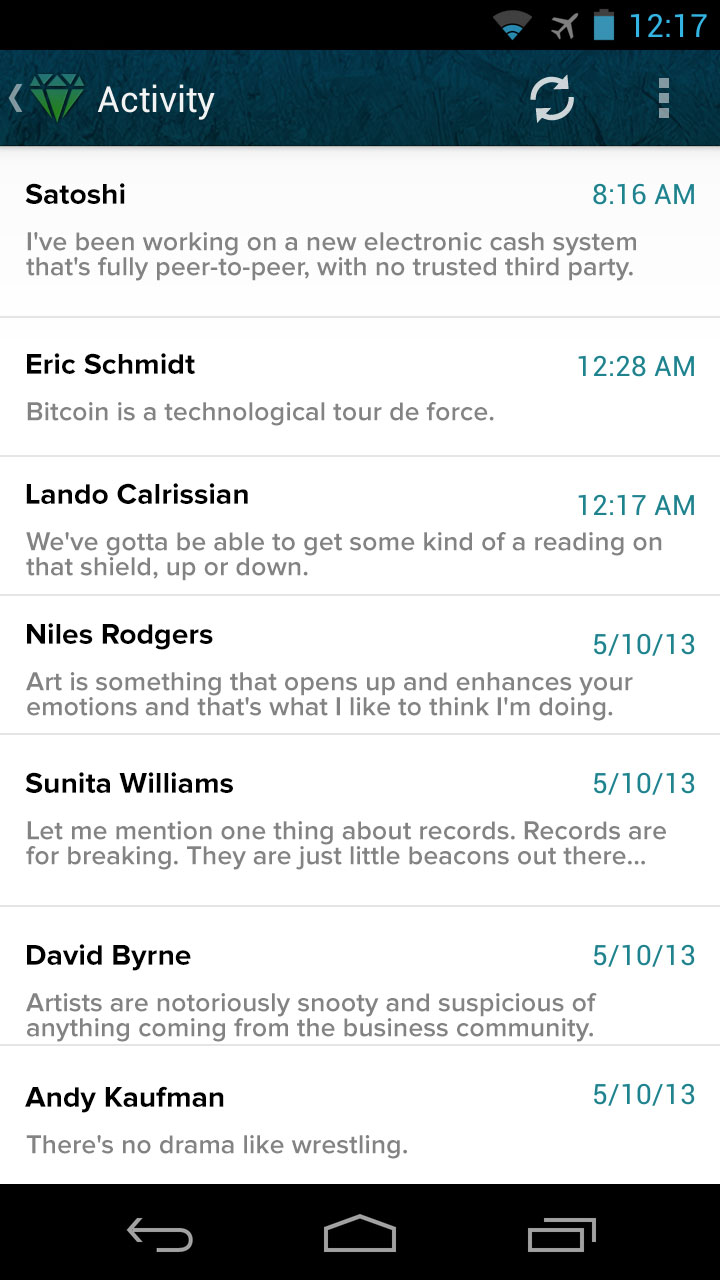 Gliph for Android 1.1 catches up with the mobile web and iPhone application in a number of areas. First, we’ve updated the Activity View to show the actual tags of the connections you’re talking with instead of the Gliphs themselves. The conversation view has been touched up, also bringing connection tag, first name or pseudonym facets into view, rather than the Gliph.

While we love the Gliphs, and know some people use them as their central identifier for other people, we have also gotten feedback that it is hard to keep track of who is who when you have many contacts. So now there is more consistent styling across iOS, Android and the web.

What’s New: Image Viewing
While we weren’t able to get image attach into this update, you can at least now view image thumbnails sent by your web using and iOS using connections. We hope to get uploading into an upcoming update. END_OF_DOCUMENT_TOKEN_TO_BE_REPLACED

We are happy to announce that Gliph has joined the Boost VC startup accelerator. Gliph will join around a dozen other companies in a business incubation that includes mentorship, seed capital and a heavy focus on product development.

Beginning late June, Gliph’s founders (Rob and Nick) will relocate to Boost’s provided housing and office space in San Mateo, California. There we will join a group of startups specifically focused on the Bitcoin digital currency. The team will be working throughout the summer to refine the Gliph experience and further integrate Bitcoin into Gliph’s digital identity platform.

We chose Boost because founders Adam Draper and Brayton Williams have shown themselves to be early advocates for the Bitcoin currency. They’ve also put together a stellar program for startups that is a great fit for Gliph’s stage as a company. END_OF_DOCUMENT_TOKEN_TO_BE_REPLACED