END_OF_DOCUMENT_TOKEN_TO_BE_REPLACED

One of the most important aspects of Gliph is our Customer Support. We dedicate a great deal of attention to the specific requests of Gliph’s users.

Today, we’re excited to welcome a new member to the Gliph team, who will help us maintain and improve our customer support, Levi Luke. Gliph customer support runs the gamut of resolving problems with logging in to identifying and tracking bugs that require development work to fix.

Levi distinguished himself as a user of Gliph first, including creating the intro video for Gliph’s desktop web app. In learning more about Levi, we found he brings a variety of technical and media expertise to the team.

Levi has been helping out at Gliph for a little while now, and we feel like it is time to recognize his work.  Next time you are in the Gliph app, please consider saying hello and welcoming Levi to the team. You can simply send Support a message in-app, or you can reach him at support@gli.ph.

Please join us in welcoming Levi! You can say hello by sending a message to Gliph Support.

Today’s a big day, with major updates across every client on Gliph’s platform. We’ve created blog entries to support each aspect of the release, here’s a summary of each update along with a link.

Bitcoin has been Returned to the Gliph iOS Application
We’ve just released version 1.90 of the Gliph app, which was approved by Apple for the App Store late this last week. The release restores the ability to send Bitcoin between Gliph users, and adds the new capability of paying outside the Gliph network using QR codes.

New Desktop Web Application Now Available
Gliph now supports all modern web browsers with a brand new desktop web application. Whether you’re on a tablet, laptop or desktop computer you can now take advantage of everything Gliph has to offer.

Revamped Android Application
We’ve completely rebooted our Android application and it now stands in near-parity with our iOS application. We’re particularly pleased to bring this long awaited update to the Android platform.

The update includes a refreshed look, Secure Group Messaging support, Profile photos and a brand new QR code scanner. You can now use Gliph on Android to spend Bitcoin from your Coinbase or Blockchain wallet outside the Gliph network.

Privacy Policy Update
With all of these product updates, we also took the time to make the first update to Gliph’s Privacy Policy since we first got started. Our entire team stands behind this policy, and it served as the basis for many of the features that Gliph continues to offer.

We improved the Privacy Policy by focusing on its readibility and clarifying language on how we handle personal data. We have a blog that explains every change in great detail, and encourage everyone to have a look. 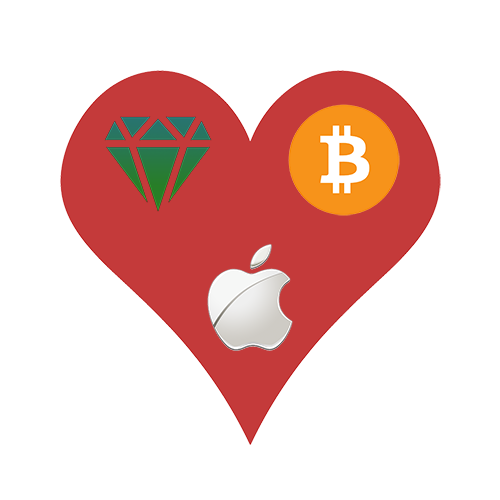 The Gliph core team is very pleased to announce that Bitcoin transfers have returned to the Gliph iOS mobile application. In today’s release, we have not only returned Bitcoin transfers between Gliph users, we’ve added the ability to scan QR codes and pay using Bitcoin.

The call from Apple Worldwide Developer Relations came just before Thanksgiving last year. Without much elaboration as to why, Apple told us the Gliph iOS app would need to remove the ability to send Bitcoin or risk being pulled from the App Store.

That event kicked off months of publicity in reaction to our blog post on the state of Bitcoin in the App Store and Google Play. The press feasted on the controversy of Apple’s behavior and Gliph became something of a poster-child for Bitcoin’s fight for mainstream acceptance.

If you wiped away the media hype, and focused on the appeal letter we made public, you would find the real reason why Apple should not have made that choice in the first place:

“By inhibiting the creation of Bitcoin apps Apple holds innovation back from the world. We are witnessing the dawn of a massive technological innovation. The potential impact of virtual currencies stretches further than any company or platform.”

END_OF_DOCUMENT_TOKEN_TO_BE_REPLACED

Changed: “Your Privacy is our Mission” to “Introduction”
Reason: We felt this was too splashy. This document is an outline of privacy considerations for Gliph users.

Removed: “Your Facet information is, by default, kept private.” 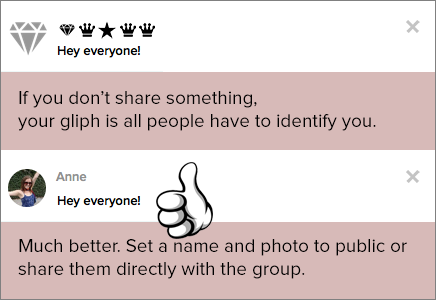 Reason: Many users have given us feedback that it is too confusing to see people as Gliph’s only. In our own use of Gliph, we notice that in the great majority of cases, people do want to be seen as either their First Name or Pseudonym, rather than a symbol-based username. It is just much easier to recognize who is who.

For this reason, during sign-up and while editing profile we will set certain facets to Public by default if we feel it dramatically improves the overall Gliph experience. We will still provide you the option to set them to Private before they are saved the first time, or at any time after initial setup.

Gliph was in the running for the Bitcoin Foundation’s first annual Blockchain Awards.

The Blockchain Awards are being put on by the Bitcoin Foundation and Blockchain.info, and will be presented in Amsterdam at the upcoming Bitcoin 2014 conference. The awards cover a variety of categories, including Most Insightful Journalist, and Most Impactful Charity.

Nicolas Cary, CEO of Blockchain, explains that “with these awards we hope to take a moment and reflect on the amazing contributions from the Bitcoin community. We want to honor the exceptional quality, leadership, and technical innovation we see every day.”

Update: Mycelium Bitcoin Wallet for Android won this award! We think Mycelium team is also doing some really cool things and congratulate them on the win. The other finalist was Airbitz.

Over the past few months the Gliph team has been working on a project to improve how things work behind the scenes. If you’re following the company and want the inside scoop on what’s new that you can’t see, this blog post is for you.

We’re excited about improving peer-to-peer transactions and providing a great platform for identity. In following this passion, we’ve iterated on Gliph by adding new features and changing the way the system works.

Some of the additions were in response to insights along the way. For example when we learned that  the majority of Craigslist deals were handled via email and lacked privacy, we built Cloaked Email to make that a better experience. Later, we realized Bitcoin would be a a fantastic way to close transactions and built in simple Bitcoin transfer into Gliph secure messaging.

We’ve learned a lot about email and believe communication can be faster and better than that. GliphMe‘s secure and private instant channel is the first of our efforts here.

Adding these capabilities over time caused a build-up of technical debt. And like any debt, it can not be ignored. But unlike some debt, it wasn’t the type of thing that could be paid off slowly over time. As a result, this re-factor was focused on two areas of the Gliph platform:

END_OF_DOCUMENT_TOKEN_TO_BE_REPLACED

If you’ve been following Gliph, you may be aware that its founders temporarily relocated to San Mateo, California to participate in the Boost VC startup accelerator. For three months, our team worked almost exclusively on improving Gliph’s support for the Bitcoin virtual currency.  Once Demo Day hit, we were pleased to have built Gliph into the world’s easiest way to start using Bitcoin.

Gliph subsequently opened a Seed investment round led by Silicon Valley veteran Timothy Draper. Tim served as a mentor to Gliph during our work at Boost and has personally played an important role in bringing services like Skype, Baidu and Hotmail to the world.  Gliph also raised money from Portland’s Rogue Venture Partners, the Boost Bitcoin Fund, and follow-on investment from the Portland Seed Fund. You can learn a bit more about Gliph’s fundraising on its page on AngelList. END_OF_DOCUMENT_TOKEN_TO_BE_REPLACED

We’ve published a new website for Gliph.  It includes a new design, along with flexibility to look better on mobile devices. We also updated our Help and FAQ page, and added new pages for Bitcoin and for Gliph’s Organizational Security Practices.

You’ll notice on the home page that we feature a screenshot of a Gliph messaging conversation that includes a picture message. Currently, one of Gliph’s founder’s cats is featured. We would like to open this photo to the Gliph community. For the next 10 days, we’ll take submissions of photos. After that, we’ll choose a selection to include in regular rotation on the home page. Please note, we favor cat photos.

How to submit your photo: Send the photo to the Support Gliph with the message “photo contest.”

Terms and conditions: You keep rights to the photo, and grant Gliph the right to use of the photo on the front page of Gliph’s website.

Gliph had a strong presence at the Bitcoin 2013 conference in San Jose, California in May and we’re just now sharing some of the media and story of the event. 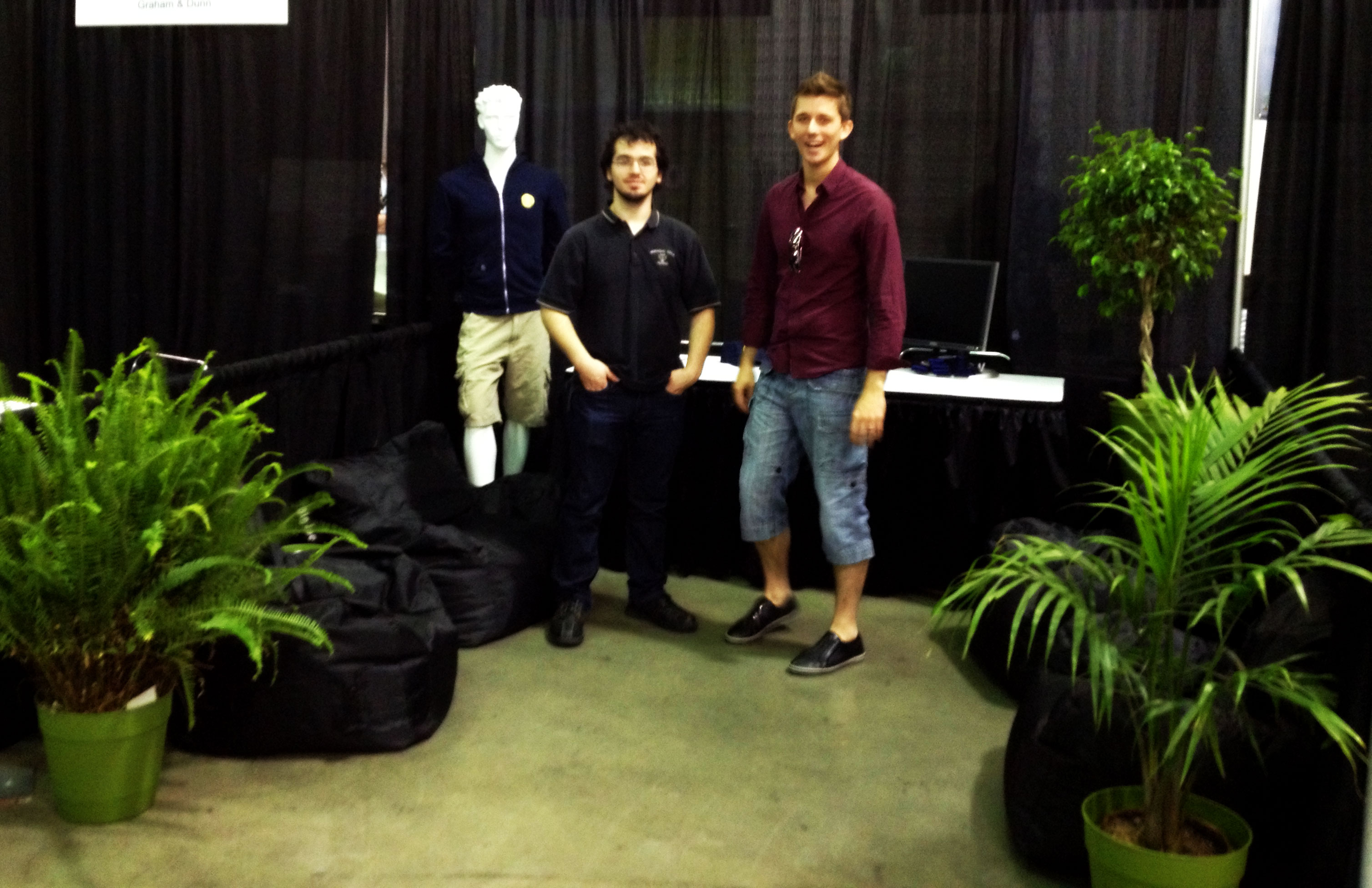 The company first got involved when your blogger and co-founder (Rob Banagale) accepted a panelist spot on the Law Enforcement and Financial Privacy track at the conference. At this time our development team was working feverishly on the first release of the Bitcoin integration into Gliph.

Wanting to do something special for the earliest and most core Bitcoin adopters, we created custom Bitcoin branded merchandise for the event. This included hats and hooded sweatshirts embroidered with a great looking Bitcoin logo. We sold these for Bitcoin at our booth.

We did our release on Friday, May 17th, which included a feature article in PandoDaily. That article was written by Erin Griffith and included our news of joining the Boost VC startup accelerator. END_OF_DOCUMENT_TOKEN_TO_BE_REPLACED