Over the past few months the Gliph team has been working on a project to improve how things work behind the scenes. If you’re following the company and want the inside scoop on what’s new that you can’t see, this blog post is for you.

We’re excited about improving peer-to-peer transactions and providing a great platform for identity. In following this passion, we’ve iterated on Gliph by adding new features and changing the way the system works.

Some of the additions were in response to insights along the way. For example when we learned that  the majority of Craigslist deals were handled via email and lacked privacy, we built Cloaked Email to make that a better experience. Later, we realized Bitcoin would be a a fantastic way to close transactions and built in simple Bitcoin transfer into Gliph secure messaging.

We’ve learned a lot about email and believe communication can be faster and better than that. GliphMe‘s secure and private instant channel is the first of our efforts here.

Adding these capabilities over time caused a build-up of technical debt. And like any debt, it can not be ignored. But unlike some debt, it wasn’t the type of thing that could be paid off slowly over time. As a result, this re-factor was focused on two areas of the Gliph platform:

END_OF_DOCUMENT_TOKEN_TO_BE_REPLACED 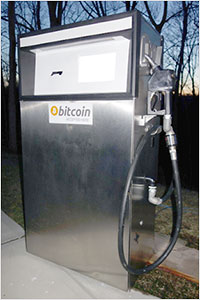 Sit back and imagine a future where you pull up to a pump and pay for your gas using Bitcoin. This vision may be closer than you think. Thermo dynamics researcher, Bitcoin enthusiast and DIY pro, Andy Schroder, has just created the world’s first commercial-ready Bitcoin fuel pump.

From a distance, Schroder’s fuel pump looks like one you would find at a mom and pop style gas station; the size is a bit shorter than what you’d normally see at a 76 station today. But the small-town sentiment ends when you walk up to the machine.

The digital display on the front shows the current milli-Bitcoin-based market-rate for fuel at the time of purchase. Getting a fill-up is easy if you END_OF_DOCUMENT_TOKEN_TO_BE_REPLACED